The Hera Group’s continuous EBITDA growth path was not interrupted even by the very challenging external environment experienced in the first nine months of the current financial year.

EBITDA progressed by 20.4m€ (+2.4%), with the regulated businesses leveraging the service quality to offset the cut in regulated returns while the liberalised businesses were benefiting from careful management policies.

While the Environment area is the one that drove the Group’s EBITDA, with an increase of 27.8m€ that reflects the higher operating margins from WTE energy production and plastics regeneration, the efficient performance of Networks also made a positive contribution of 10.6m€, despite the cut suffered at WACC level. The Energy area, on the other hand, posted a sizeable decrease in its EBITDA of 12.3m€. Such trend reflects, in addition to a slightly lower sales performance, also the negative impact (-10.7m€) due to the normalisation vs. 2021 of ancillary services provided to Terna, despite the continued sound results of Ecobonus-incentivised activities, aimed at improving the energy efficiency of buildings.

To ensure a better comparability of its performance over time, as in the 2022 Half-Year Report, Hera has chosen to present the results for the first nine months of 2022 according to a management criterion, instead of the accounting criterion, which provides for the valuation of commodity inventories using the weighted average cost criterion. To ensure a consistent comparison, the figures for the first nine months of 2021 have also been presented according to the management approach.

Due to the sharp increase in gas prices, in fact, the intense storage activity that has taken place since April 2022 with the aim of guaranteeing the supply service to customers has taken place at costs per cubic metre that are up to five times higher than in the previous year. However, the higher value of gas purchases made for storage, determined on a management basis, will be fully recovered in the coming months, when withdrawals will be made to deliver gas to customers, according to contracts with defined prices.

In the first nine months of 2022 Group Revenues reached 14,320.1 m€, recording a 122.9% increase compared to the same period of the previous year. The Energy area has driven that performance, as a result of the sharp rise in the commodity prices.

The EBITDA breakdown by strategic area indicates that the Waste area was the best performer, with an EBITDA increase of 27.8 m€ vs. nine-month 2021 (+12.7%). While the regulated collection business recorded a slight decrease (-2.0 m€), the liberalised business benefitted from the high energy prices. Although the shutdown for revamping of the two WTE plants in Trieste and Ravenna had a negative impact (-7.8 m€), the power generation from the WTEs provided a contribution of 23.2 m€, net of the higher production costs. Aliplast continues to make a positive contribution (+8.4 m€), since high oil prices fuel the demand for regenerated plastics and the company benefits from a strong leadership position. Both organic growth, with an addiction of 4.0m€, and M&A (+2.0 m€), which leverages the consolidation of Macero Maceratese, provided a positive contribution. The prospect of future additional benefits from M&A remains visible, as in this area Hera has just signed the acquisition of 60% of ACR, a leading company in industrial site remediation.

The Networks made a contribution of 10.6 m€ to the growth of consolidated EBITDA (+3.2%), despite the 70-bps cut in WACC of distribution regulated activities and the 40-bps cut in those of the water cycle, which overall had a negative impact of 16.5m€. The weight of the premiums achieved for the quality of service was significant, in gas (+1.3m€) but especially in the water cycle (+22.8m€). Further drivers for the EBITDA in this area were both district heating and efficiencies, which provided a positive contribution of approximately 3m€.

The Energy areas have posted a decline in EBITDA of 12.3 m€ (-4.6%) compared to nine-month 2021. Overall, trading activities showed margins that held up well. While both the energy efficiency activities in residential buildings, incentivised by the Ecobonus, and the value-added services continued successfully, energy commodity sales in the third quarter suffered from high price volatility, which resulted in unfavourable conditions for modulation activities. However, the positive factors failed to offset the reduction (-10.7 m€) in dispatching services provided to Terna compared to the first nine months of 2021, following a normalisation of demand from the grid operator. 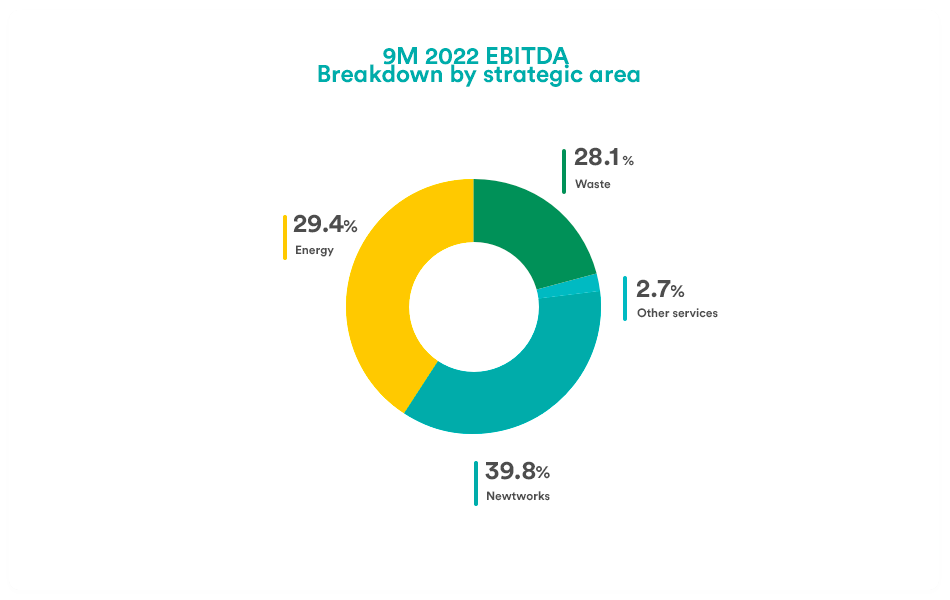 In difference to EBITDA, which grew by 20.4 m€, EBIT decreased, albeit marginally, by 4.9 m€ (-1.1%), settling at 437.0 m€. This divergence in performance reflects the increase of 25.3 m€ (+6.1%) in Depreciation & Amortisation, essentially as a result of new operating investments, changes in the scope of consolidation, higher commissions for sales companies, and prudent provisioning on doubtful debts.

The net result from the area of financial management was negative by 89.5 m€, which compares with a balance of 85.4 m€ in the first nine months of 2021. This development reflects the increase in Net Financial Debt, which in turn was driven by the expansion of Net Working Capital due to higher energy commodity prices. Other factors that had a negative impact were lower income from late payment indemnities (-2.7 m€) and lower profits from associates and JVs (-1.4 m€).

The tax rate reaches 28.5%, recording a 2.3 percentage-point increase compared to 26.2% in the same period of 2021. Such change is mainly due to accounting for the extraordinary contribution against ‘high utility bills’ (l.51/2022), which had a 2.3 m€ weight on total taxation of 99.1 m€. The lower tax relief allowed on innovation and environment investments also played a negative role.

In the first nine months of 2022 Net Profit post Minorities amounts to 214.1 m€, a 25.4% decline compared to the same period of 2021. The decrease is actually much lower, around 7%, when adjusting the 2021 figure from non-recurring items that made a positive contribution of 56.2 m€.

The Debt-to-EBITDA ratio, which is formally equal to 3.62x, remains below the threshold of 3.0x that Hera deems appropriate not to exceed: stripping out the amount dedicated to gas storage, the leverage is actually equal to 2.9x.

This website uses cookies to improve your experience while you navigate through the website. Out of these, the cookies that are categorized as necessary are stored on your browser as they are essential for the working of basic functionalities of the website. We also use third-party cookies that help us analyze and understand how you use this website. These cookies will be stored in your browser only with your consent. You also have the option to opt-out of these cookies. But opting out of some of these cookies may affect your browsing experience.
Necessary Always Enabled
Necessary cookies are absolutely essential for the website to function properly. These cookies ensure basic functionalities and security features of the website, anonymously.
Functional
Functional cookies help to perform certain functionalities like sharing the content of the website on social media platforms, collect feedbacks, and other third-party features.
Performance
Performance cookies are used to understand and analyze the key performance indexes of the website which helps in delivering a better user experience for the visitors.
Analytics
Analytical cookies are used to understand how visitors interact with the website. These cookies help provide information on metrics the number of visitors, bounce rate, traffic source, etc.
Advertisement
Advertisement cookies are used to provide visitors with relevant ads and marketing campaigns. These cookies track visitors across websites and collect information to provide customized ads.
Others
Other uncategorized cookies are those that are being analyzed and have not been classified into a category as yet.
SAVE & ACCEPT
Powered by