In the challenging operating environment of first-half 2022, once again Hera proved that its business model can deliver continuous EBITDA growth.

The 3.3% progress in the half-year EBITDA was achieved by leveraging a careful search for the best opportunities within each business area and maintaining a low risk profile in managing each of them. In this way, valuable results were delivered in all businesses.
The Environment area posted an increase of 5.7%, mainly due to WTE power generation and the plastics regeneration business, while the performance of Networks (+3.6%) benefitted from organic growth and a colder climate, which more than compensated for the 70-basis point cut in WACC set by the Regulator. Lastly, in the Energy area, where the expansion of the customer base continued, the energy efficiency activities in buildings went on with rewarding results, under the boost of the ‘Ecobonus’ incentives.

In the first half of the year, Net Financial Debt increased by 421.1 m€ (+12.9%), mainly due to increased gas storage (+377.8 m€) that Hera chose to implement, with the aim to manage demand for the coming winter season following a prudent approach. The Debt-to-EBITDA ratio still stands at 2.96x, remaining below the 3x threshold that Hera has set itself not to exceed.

To ensure a better comparability of its performance over time, Hera has chosen to present the first-half 2022 results according to the management accounts, instead of the financial reporting standards, whereby the commodity inventory is valued using the weighted average cost method. The figures for the first half of 2021 have also been presented on a management accounting basis for the purpose of a like-for-like comparison.
Due to the sharp increase in gas prices, the intense storage activity that took place from April 2022 with the aim of guaranteeing the supply service to customers, took place at costs per cubic metre up to five times higher than those of the second quarter of 2021. However, the higher value of gas purchases made for storage, which is determined in the management accounts, will be fully recovered in the coming months, when withdrawals will be made to deliver gas to customers, according to contracts with defined prices.

In first-half 2022, Group Revenues amounted to 8,896.0 m€, up 112.8% compared to the same period of the previous year. As had already been the case in the first quarter, the Energy segment made the most significant contribution, due to the sharp rise in commodity prices and increased trading activity. Also worth mentioning is the contribution to consolidated Revenue growth of 144.0 m€ made by energy efficiency services for buildings together with value-added activities.

Group EBITDA in the first six months of 2022 reached 631.2 m€, an improvement of 3.3% compared to the first half of 2021. The positive EBITDA performance was driven by organic growth factors, the incremental contribution of M&A transactions, as well as the strong expansion of circular economy activities, to an extent that more than offset the negative impact of the WACC cut by the Regulator.

Considering the breakdown of EBITDA by strategic area, the Environment recorded a 5.7% increase, having improved its EBITDA by 8.1 m€ compared to the first half of 2021. The regulated part of collection recorded a decrease (-4.6 m€) due to the discounts offered in the tenders, which Hera will, however, be able to recover over time, given the 13-year duration of the concessions it was awarded. The result for this area was also negatively impacted by the shutdown of the two WTEs in Trieste and Ravenna for revamping activities (-6.8 m€); nevertheless, energy production from the WTEs made a positive contribution of 9.8 m€, net of inflation on the related production costs. The contribution of Aliplast (+5.1 m€) also continued to be very significant, as high oil prices fuelled demand for regenerated plastic. In the first half of the year, the incremental contribution of M&A also continued (+3.8 m€), as a result of the inclusion of the Vallortigara Group in the Hera perimeter from the second half of 2021.

Networks contributed 8.3 m€ to the growth of consolidated EBITDA (+3.6%), fully offsetting the impact of the 70 basis point cut in WACC (-€10.2m) in the regulated activities of distribution. Organic growth contributed to the net increase in this area, due to new connections and the effect of colder winter temperatures, which favoured the district heating business. Service quality premiums were also significant, both in gas and in water, as efficiencies exceeded the levels set by ARERA.

The Energy areas showed an increase of 6.8 m€ (+3.1%) compared to the first half of 2021, having reached an EBITDA of 225.1 m€. The biggest boost to growth in this area, amounting to 15.8 m€, came from energy efficiency activities in residential buildings, incentivised by the Ecobonus, as well as value-added services, mostly for the installation of photovoltaic panels at customers’ premises. Sales activities also made a positive contribution (+2.3 m€), with a policy of hedging against fluctuations in commodity prices that proved rewarding. Moreover, the expansion of the customer base played its part, with 107.7 thousand new customers acquired in the last twelve months, of which 75 thousand in the electricity sector and about 33 thousand in the gas sector. These positive factors were partially offset by the reduction (-11.3 m€) recorded in ancillary services, following the normalisation of dispatching services provided to Terna compared to the first half of 2021. 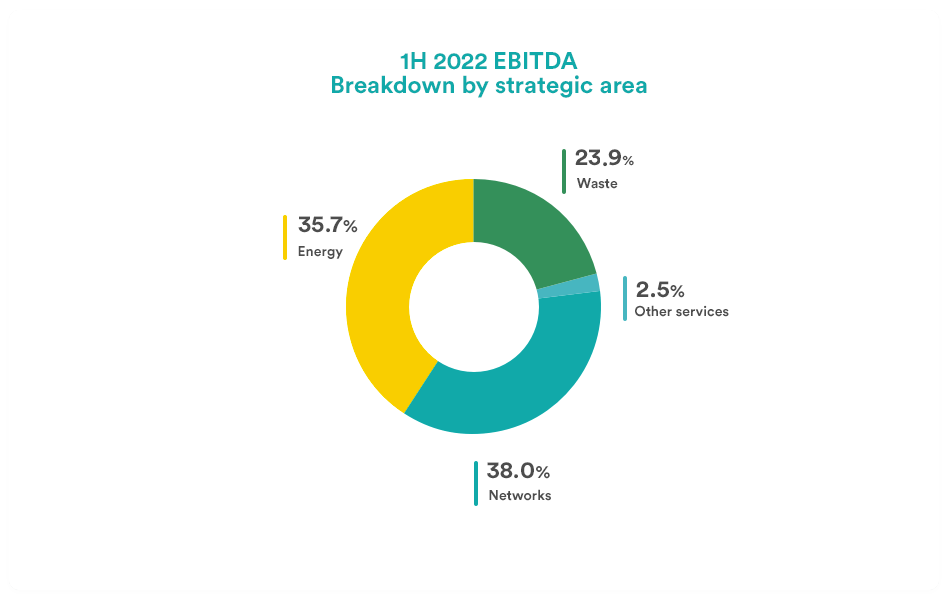 Despite the EBITDA increase, EBIT slightly declined (-0.5%) to 334.9 m€. Such performance reflects the 8% increase in Depreciation, Amortisation and Provisions, mainly due to new operating investments, changes in the scope of consolidation, higher commissions from sales companies, but even prudent provisions for write-downs.

The net result of the area of financial management improved (+7.6% compared to the first six months of 2021), reaching 50.9 m€. In the six months just ended, Hera benefitted from lower financial expenses on long-term debt of around 3.8 m€, as a result of successful liability management operations, including the issue of the 500 m€ sustainability-link bond with a coupon of 108 basis points and maturity in 2034.

The tax rate rose from 26.7% in the first half of 2021 to 29%. The increase of more than two percentage points is mainly attributable to the recognition of the extraordinary contribution against the ‘high utility bills’ (Law 51/2022), which weighed in at 2.3 m€, and to lower benefits on the tax credit for investments in innovation and environmental protection.

In the first half of 2022, Net Profit post Minorities amounted to 183.3 m€, thus recording a decrease of 1.6% compared to the same period of 2021 adjusted for non-recurring items.

All in all, the Debt-to-EBITDA ratio, at 2.96x, remains below the 3.0x threshold that Hera has set itself not to exceed.

The profitability indicators, with ROI at 8.5% and ROE at 9.8%, are still at sound levels, above the cost of capital. This, despite both indicators reflect the impact on the denominator of the higher investments made for the purchase of gas for storage, while the economic effects on the numerator will only be visible in a few months, when gas will be withdrawn with the start of the new heating season.

X
This website uses technical cookies for its proper functioning and third-party analytical cookies to promote initiatives in line with your needs as specified in the complete information. Click the X in the top right corner or in the area outside this banner to continue browsing and consent to the use of technical cookies. If you wish to accept all the cookies, click on ACCEPT. Click here to see the full policy and customise your choices if you wish to do so. Remember that you may change your cookie settings at any time simply by clicking on “Cookie Policy - Change your cookie settings” in our footer.
Choose and customize I accept
Manage consent