In the first half of 2020, amid the pandemic-induced emergency, Hera has fulfilled its commitments toward stakeholders: it has guaranteed continuity of customer service while safeguarding the health of its employees; it has remunerated its shareholders with the 10 euro cent dividend envisaged in the Business Plan; it has made its presence felt the areas in which it operates with material aid to healthcare facilities.
It has also intervened to support customers in the most fragile situations and suppliers in temporary difficulties.

Half-year results indeed prove a solid economic performance in a challenging context. Behind them, there is an attitude shaped by past strategic decisions as well as a social responsibility approach that remained consistent and proactive during the hardest times of the crisis.

The EBITDA increase that neutralised the negative factors was driven by:

Consolidated EBITDA shows an increase of 13.8 m€ (+2.5%) compared with the first six months of 2019, mostly driven by the performance of the Energy areas (+15.7 m€), following the entrance of EstEnergy Group companies in Hera’s consolidation scope.

The Electricity area recorded significant EBITDA growth (+12.3%), mainly due to the consolidation from 1 January 2020 of EstEnergy activities. At the end of June 2020, Hera reached in this area 1,308.5 thousand customers, compared to 1,148.1 thousand customers as of 30 June 2019. The Group could therefore offset the negative effect of the volume decrease due to the Covid-19 emergency, which had a 4.1 m€ impact on the EBITDA.

The Gas area was also on the rise, with an EBITDA improving by 2.6%, driven by a 38% increase in the number of customers. Even in this case, the increase is mainly due to the EstEnergy inclusion into the Group perimeter. The expansion of the customer base allowed Hera to counterbalance the negative impacts of both the mild climate and the Covid-19 emergency – those latest accounting for 15.4 m€.

In the Water Cycle area, the performance at EBITDA level is basically unchanged (-0.1%), against a slight increase in the number of customers (+0.2%) and cost control actions, which offset the drop in revenues essentially due to the reduction in new connections. Overall, the negative effects of the Covid-19 emergency in this area amounted to 0.4 m€.

The performance of the Waste area, where the EBITDA decreased by 3.1%, reflects a number of negative factors (the loss of incentives that affected certain WTE plants as well as the decrease in volumes treated as a result of the Covid-19 pandemic, which amounted to 9.4 m€), partially compensated by higher treatment prices and stable volumes in special waste.

The EBITDA of the Other Services experienced a strong growth (+13.5%), with an improvement in margins of telecommunications services and public lighting, which offset the negative effects of the Covid-19 emergency (0.5 m€). 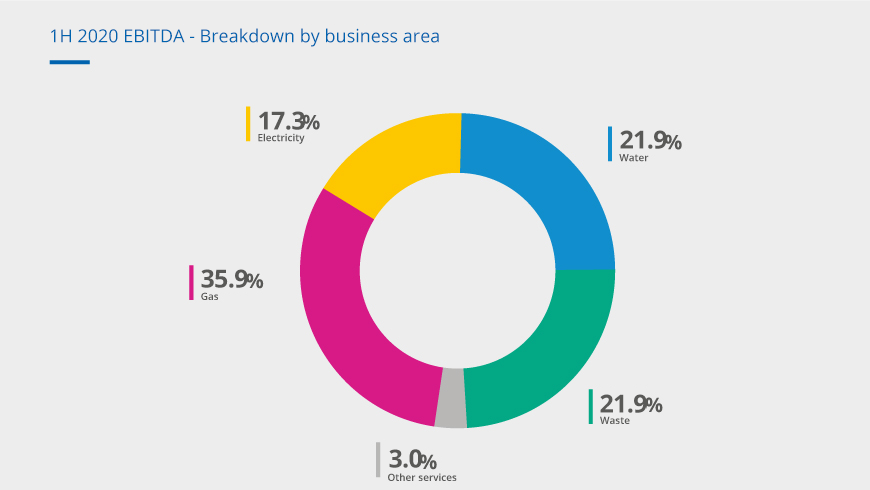 The result of the area of financial management was a 56.2 m€, an increase of 11.3 m€ (+25.2%) compared to first-half 2019. The rise is entirely attributable to the notional charges of 11.3 m€ deriving from the put option envisaged in the agreement with Ascopiave.

The fiscal management area shows a sizeable improvement (-5.5 m€), with a 27% tax rate, vs. 28.7% in H1 2019. Hera seized the benefits of tax optimization made possible by the current Italian legislation through investments focused on technology and environment.

The Group Net Profit is 166.2 m€, unchanged compared to the level of H1 2019 even though it had to incorporate a series of purely “notional” charges stemming from the EstEnergy transaction.

Net Financial Debt stands at 3,083.6 m€, down compared to 3,274.2 m€ as at 2019 year-end as a result of strong cash flow generation. Debt/EBITDA ratio reached 2.35x, on like-for-like basis, i.e. excluding about 600 m€ of figurative debt related to the put option on EstEnergy, vs. 2.55x as of 30 June 2019. Even including the impact of the put option, the comparison remains positive, since the ratio moved from 3.0x at the end of 2019 to 2.81x. Hera’s financial structure continues to be very strong, with an average debt maturity exceeding 6 years and more than 56.6% of the debt stock expiring over five years. 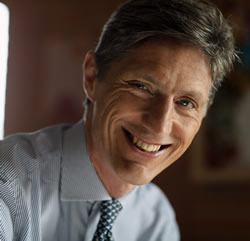 An investment case perfectly fitting in the new market environment

Innovation in traditional multi-utilities. Only those who were “plan-ahead” companies in the past can move fast now.